Ever since the Import-CSV command was introduced in PowerShell it has been widely used, can be incredibly powerful, yet can be difficult for beginners to learn.

In this series of posts I will remedy that by taking you through the following:

For those who are here to learn import-CSV but are new or unaware of PowerCLI it is a collection of VMware cmdlets that are used in Powershell to manipulate VMware objects like Virtual Machines.

For this article we will use a sample csv located in c:\temp called VMlist.csv and it will contain the following data.

If you aren't familiar with a csv or comma seperated file it is essentially a text file with the following characteristics:

In this case we have three VMs,

There is a number of ways to import a CSV in this article we will be examining 2 methods to do so.

Import Method 1 - Importing into a single array of objects

Using this method, the the whole csv is imported in to one array each line is an object each column a property.

The code to do this

Now that wasn't so hard was it?

If we echo the result we now have:

This method is useful as each object has a number of values assigned corresponding to the headers in the CSV. I use this one the most and the more experience you have with objects the more useful this will be.

Import Method 2 - Importing one or more columns to seperate arrays

The code to do this:
First we declare an empty array,

Then the Import-Csv Statement

The second line imports the CSV and then loops through each line of the CSV moving the VM property into an Array called $AllVMs.
When looping through an array of objects in PowerCLI the current object is referenced as $_ and the property to be used follows the '.', in this case .VM, hence $_.VM as shown above.

The '+=' operator represents "add the object as a new entry in the array". It cannot however be used to create the array. That is why the first line exists, it initialises the array $AllVMs as an empty array. Once the array exists, empty or not we can use the '+=' to add new entrys to the array.

By doing this it makes it very easy to run commands against the array, think running a command like restart-vm against those VMs in PowerCli.

So that was unseful but what if you want to put all 3 columns in seperate arrays what does that look like? I'm glad you asked.

Using the example csv I get: 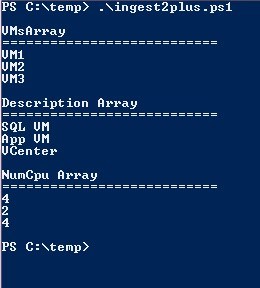 So now you know how to use Import-CSV to import from CSV into an array.
In the next part of the series I will show you how to manipulate array data using ForEach and For Statements

Part 2 – How to manipulate array data using ForEach and For Statements.

Written in collaboration with: Anthony Brown

Automation and devops in the VMware ecosystem - A blog by @anthbro.

Automation and devops in the VMware ecosystem - A blog by @anthbro.